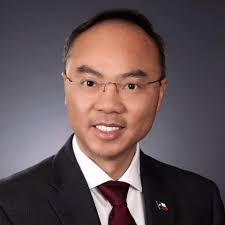 Born in South Vietnam to a police officer father and an accountant mother, Steve believed early on in the promise of the American dream. The day before the fall of Saigon, Steve and his family boarded a ship full of refugees seeking freedom and democracy. They arrived in the U.S. in 1975 and settled in Houston. Although his parents had to work multiple jobs to put food on the table, Steve was undeterred by the challenges they faced. He learned education, hard work, and determination would be the keys to success.

As a family doctor and small business owner, Steve treated thousands of patients from his four family care clinics, some of whom he provided care without charge. As busy as Steve is, he still finds the time to do charitable works. Steve and Jackie donate time and money to countless charities and non-profit organizations. He is an active board member of Tinh Luat Buddhist Temple and Wings of Innocence, a nonprofit group dedicated to helping impoverished orphans. Steve and Jackie are the proud parents of three children, Catherine, Julie and James.
Tracy